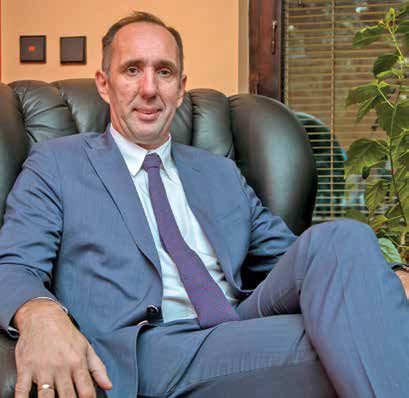 “When we look at this data, we can see how truly big and important is the presence of the Dutch companies in Serbia. Hence, it is important for the Netherlands to finally get its business association in Serbia, which will bring together all these companies”, says Djordje Petrović, Founder/Chief Executive Officer of the Dutch-Serbian Business Association (DSBA).

“Guided by all these facts, and after having agreements, consultations and meetings, Bojan Leković, the owner of Kupujem- Prodajem, Tom de Boer, the owner of Todebo, Cees Hilhorst, the owner of S-Biom and myself, as the owner of Companies Connected, started the initiative to create the Dutch-Serbian Business Association in June this year, with the full support of the Dutch Embassy in Serbia, and are now speaking to other Dutch companies to join” explains Petrović.

— At the moment, Dutch companies operate in different sectors. Large companies such as Heineken, Ahold Delhaize and Philips have a strong market presence, then there is Vahali Shipyard, Windvision, Levi9 in the IT sector, Kupujem- Prodajem, TomTom, De Heus, the producer of fodder etc. There is almost no economic branch in Serbia where Dutch companies are not present in one way or the other. We believe that agriculture will be even more appealing to Dutch investors in the future, although there is already a pronounced interest in it. This should be also very important for Serbia, bearing in mind that the Netherlands is the second largest exporter of agricultural products, despite the fact that its surface is more than twice smaller than Serbia’s. The knowhow that Dutch companies bring with them will take precedent over everything else. If Serbia adopts and implements this know-how, and considering its agricultural potential which indisputably exists, we can expect significant progress to be made in this field. Also, we expect to see the growing trend of cooperation in the IT segment, which is already well developed. However, there are certainly many opportunities for the two countries to establish a cooperation, and improve the existing one. This is something that the DSBA can definitely help with.

Which particular interests does the DSBA intend to advocate?

— Some of the Association’s primary goals are realization and improvement of common and general interests in economy and business, establishing social contacts between Serbia and the Netherlands, as well as the promotion of the Netherlands’ image in Serbia at the business, cultural and social level. Furthermore, the Association plans to be a mediator between the Serbian state institutions and the Dutch companies, which are the members of the Association, and help in overcoming certain challenges that they encounter, which, in the end, through talks and suggestions, will result in the business climate and business conditions in Serbia being raised to an even higher level.

Which business values, that the Dutch companies possess, would you like to share with the partners in Serbia?

— The Dutch companies are known for their reliability, top-notch professionalism in everything they do and exceptional innovations that make them so successful. As an association we will try to transfer those as much as possible to our partners in Serbia. I personally like their sincerity and directness.

What will the DSBA offer to its members?

We think that the greatest benefit to all our members will be networking and mutual sharing of experiences, given how many successful companies and individuals will be the Association’s members. When we say experience, we are referring to business experience, but also to various experiences regarding certain regulations. We also think that it will be important for all new Dutch companies, that are about to come to Serbia, to hear about the experiences of their fellow countrymen, who have been here for some time, about the differences that exist between the two countries, and how to get adapted easily to the new environment and business conditions. Education is certainly an important element that we are especially going to focus on. Last but not least, there are meetings with members of other associations, with whom we have already established contacts and planned joint events, as of the beginning of the next year.